admin
@Cook4U
Authentic Traditional Arabian Style Kabsa Rice | Saudi Style Mutton Kabsa with Kabsa Masala and Dakkous Tomato Chutney |طريقة تحضير كبسة الدجاج
مكبوس/مچبوس/ طبخ |وصفة كبسه شعبيه سعوديه |
.
A fragrant rice dish with mutton from Saudi Arabia "Kabsa" is a mixed rice dish, served on a communal platter, that originates from Saudi Arabia but is commonly regarded as a national dish in countries of the Arabian peninsula. The dish is made with rice and meat.
#kabsarice
#kabsa
#kabsah
#kabsamasala
#cook4urecipes
#kabsachutney
.
It is like the Arab version of Biryani and much similar to Mandi, a Yemeni mutton dish. The difference between kabsa and mandi is that mandi is made in a vessel that is half buried like an earthen oven in the ground. Kabsa in made on a stove in the kitchen.
.
It can often be found served in countries such as Saudi Arabia, Kuwait, Bahrain, Qatar, the United Arab Emirates, Oman, Yemen, Ahwaz (Iran) and the Negev desert in Israel. The dish is also popularly known as makbūs/machbūs (مكبوس/مچبوس)
.
Al Kabsa Recipe - Saudi Kabsa Recipe - Arabic Rice & Chicken Recipe - Yummy Tummy. Arab Kabsa is one recipe which was requested so many time.
Kabsa is a Mutton and rice main course dish that is popular not just in Saudi Arabia but across the Arab world. While there are a lot of steps to this, it is an easy Arabic recipe if you follow along.
.
Kabsa is made of chicken or Mutton that is slowly simmered in a spicy broth of tomatoes and spices. This chicken or Mutton is then removed and sometimes either fried or grilled while the broth is used to cook the rice.
The result is a mouth-watering aromatic dish which smells lemony and spicy. Some times I added Capsicum & Carrots too. The rice absorbs the juices from the chicken and vegetables and is moist. The Mutton is cooked till just tenderness and then steamed with the rice so it is all in one with the rice when you serve it out.
This is a kind of dish that you can make when you want something special. It tastes great when it is steaming hot and usually you will find it served at most Saudi occasions.
.
Do watch & make this Saudi style super delicious recipes 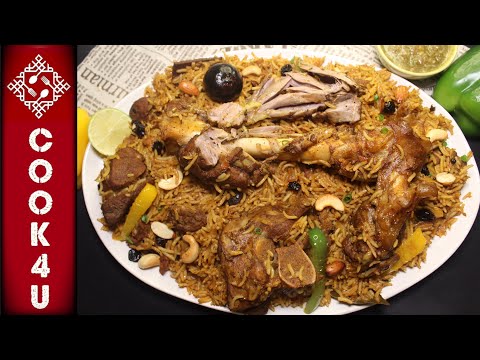